About Us - History - Restoration

In 1964, with the cooperation of Senator Jacob K. Javits and Mayor John W. Lindsay, Senator Robert F. Kennedy set into motion a round of legislative action that created the Special Impact Program, an amendment to the Economic Opportunity Act of 1964. He announced a seven point action plan that would serve as a national model for community development. The plan called for the formation of the Bedford Stuyvesant Renewal and Rehabilitation Corporation and the Development Services Corporation, involving assistance from some of the foremost leaders of the American business community.

Under the leadership of Judge Thomas R. Jones, in 1967 the Bedford Stuyvesant Restoration Corporation (Restoration) was formally established to consolidate and carry forward these efforts. Deputy Police Commissioner Franklin A. Thomas, an original board member of the Bedford Stuyvesant Renewal and Rehabilitation Corporation and later to become President of the Ford Foundation, was elected as Restoration’s first president. Initial funding support came from the Taconic Foundation, the Rockefeller Brothers Foundation, the Edgar M. Stern Family Fund, the J.M. Kaplan Fund and the Ford Foundation.

"The program for the development of Bedford Stuyvesant will combine the best of community action with the best of the private enterprise system. Neither by itself is enough, but in their combination lies our hope for the future." 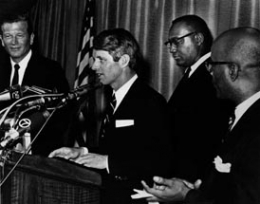 One year later, Restoration purchased an abandoned milk bottling plant in the heart of Bedford Stuyvesant, Sheffield Farms, to serve as its new corporate headquarters. Renovations soon began to create what is now known as Restoration Plaza. Completed in 1972, today this 300,000 square feet commercial plaza is home to Restoration’s headquarters, the historic Billie Holiday Theatre, the Skylight Gallery and scores of local businesses, non-profits and government agencies, including a post office, local branches of JPMorgan Chase, Washington Mutual Bank and Citibank, Super Foodtown, a satellite campus of the College of New Rochelle and Assemblywoman Annette Robinson’s office.

Since 1967, Restoration has catalyzed enormous economic, cultural, and educational improvements in Central Brooklyn. Just a sampling of our accomplishments include:

Our Center for Personal Financial Health is a one-stop, multi-service hub designed to improve local residents’ financial, occupational and educational outcomes. Serving both adults and youth, the Center facilitates economic self-sufficiency and family stability while providing opportunities for upward mobility. Its pipeline of services includes workplace readiness training and job placement, benefits screening and enrollment, financial counseling, and asset building programs. Restoration has placed over 24,000 youth and adults in jobs.

Restoration provides high school students with SAT prep classes and one-on-one counseling. Staff members review transcripts and report cards, assist in the completion of college applications and financial aid forms, and match students with tutoring and academic supports. In addition, we help young people prepare for the world of work by placing them in year-round internships and summer jobs.

Bedford-Stuyvesant residents face some serious health challenges, including some of the highest rates of obesity, heart disease and diabetes in New York City. Restoration is leading borough-wide efforts to promote access to healthy food and physical activity. During the summer months, we sponsor a farmers’ market which offers fresh organic produce at reasonable prices. Under its Farm to Early Care initiative, Restoration partners with child care centers and Head Start programs and helps them procure fresh, locally grown food for meals and snacks offered to young children. Currently over 1,500 preschoolers are served by this program. To promote physical activity among area residents, Restoration provides free, twice-a-week group exercise programs on its premises. Last but not the least, we introduced the Citi Bike bike sharing program to Central Brooklyn in 2015. In less than two years, ridership levels have risen by over 20% each year, making it one of the most successful bike share deployments in the entire city.

Our Youth Arts Academy (YAA) is virtually the only comprehensive arts education institution in Bedford-Stuyvesant. Together with another on-premises organization, the Noel Pointer Foundation, the Academy offers instruction in dance, music, and theatre to over 400 students ages 3-18 each year. The Skylight Gallery features artwork across multiple media, showcasing the work of some 100 local and national artists each year and drawing an average of 2,000 visitors. The recently renovated Billie Holiday Theatre is one of very few full-fledged theaters in Central Brooklyn, serving 30,000 people annually over a 36-week season. Winner of numerous Obie and AUDELCO awards, the Theatre is a launching pad for aspiring theatre professionals and a great community resource for residents interested in enjoying quality performances of the works of critically acclaimed playwrights.

Restoration’s Weatherization Assistance Program (WAP) has been recognized as a leading provider of energy conservation services in the New York metro area. Supported by the New York State Division of Housing and Community Renewal, the goal of the program is to reduce energy costs and improve safety and health standards for low-income residents. Services include installation of new windows, upgrade of heating systems, and the provision of energy efficient appliances, such as air conditioners and refrigerators.

The strengthening of Central Brooklyn’s economic base through new business formation and promotion of entrepreneurship is a major part of Restoration’s economic development agenda. The Brooklyn Business Center seeks to support local entrepreneurs and small businesses by providing one-on-one coaching on business planning, sales and marketing, facilitating access to capital, and securing free or low-cost legal and other professional services for our clients.

Restoration has constructed or renovated 2,200 units of housing, including homeownership and rental. The corporation has also beautifully repaired the facades of 150 homes on 150 blocks and provided $60 million in mortgage financing to nearly 1500 homeowners. At the height of its activity, Restoration was the second largest real estate owner in Brooklyn after the City of New York and controlled over $12 million in fixed assets. Today, Restoration remains committed to creating a mixed income community where households of all income levels have access to quality housing.

Restoration’s programs have attracted more than $500 million in investments to Central Brooklyn; placed over 20,000 youth and adults in jobs; and catalyzed physical and economic improvements to Fulton Street.